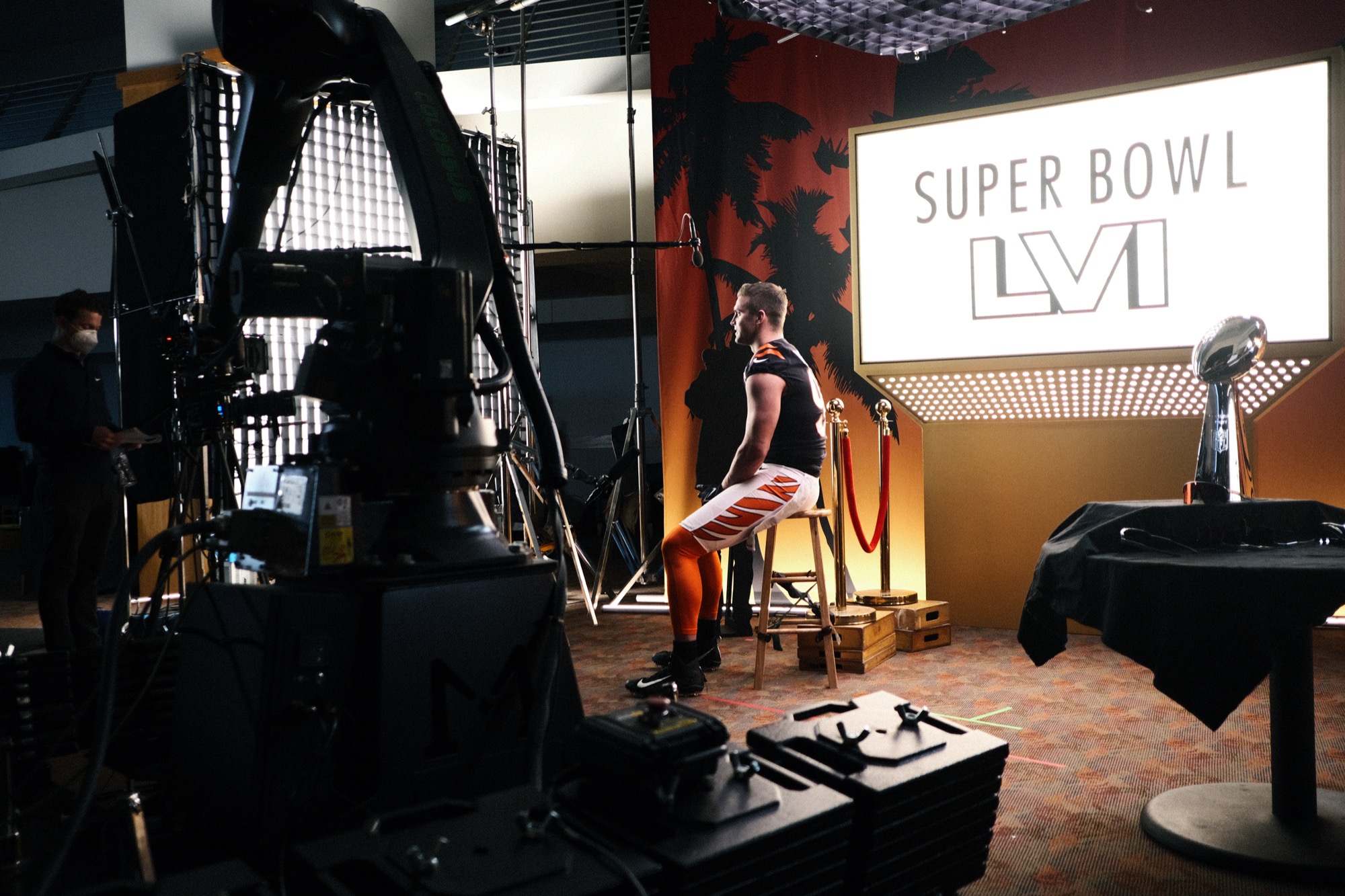 We recently took a road trip from our Nashville HQ to Paul Brown Stadium to capture some pre-game footage of the Cincinnati Bengals before they traveled to Los Angeles for Super Bowl LVI.

Through our awesome partners at Motorized Precision, this job came to life for Shift Dynamics. Headquartered in Portland, Motorized Precision was hired by NBC Sports to capture footage of the NFC Championship winners (Rams or 49ers) using their Colossus cinematic robot prior to the Super Bowl. For the AFC Championship winners (Bengals or Chiefs), Shift Dynamics got the call to shoot the content as the only team in the region with the same exclusive robotic technology.

We were pumped to be a part of the project, but it was a logistical challenge because we needed to have production plans for Cincinnati and Kansas City since we’d been contracted before the AFC title game. A good problem to have, in our opinion.

In the end (thanks to Joe Burrow’s last-minute heroics, we shipped our gear (check out the Colossus below) up to Cincinnati and got to spend some time with the Bengals players.

We immediately got to work with the Motorized Precision team and NBC Sports to coordinate the details of the shoot.

Okay, so at this point, you may be wondering why this pretty straightforward shoot needed our Colossus robot in the first place.

The advantage of using the Colossus robot over a more traditional camera gear package in this situation is that we could use software to replicate the exact same path and movements as the MP team who was shooting the Rams players over 2,000 miles away.

A robot will do the exact same thing every time, so it’s perfect (and essential) for multiple takes, visual effects tricks, or challenging repeatable moves that a standard jib or Steadicam is unable to achieve no matter how skilled the operator.

What you’re left with is two sets of virtually indistinguishable footage (besides the players and the uniforms) that looks like it was captured at the same place, at the same time and by the same camera.

Wouldn’t it be easier to shoot all the footage at once after the Bengals had arrived in L.A.? Well, that depends on who you ask.

With so many moving parts in this project, we had to be extremely flexible (and willing to adapt quickly) in order to achieve the client's goal.

Check out this timeline of how everything came together:

Take a look at some of our behind the scenes footage from this shoot. We’re pretty proud of what we were able to do!

We’re really proud of the work our team did to pull off this project, and we can do the same (and a lot more!) for clients in all categories, from short video projects to feature-length films.

What are you working on? We’d love to chat about how we might be able to support your vision and get it done.

Call or email us anytime.