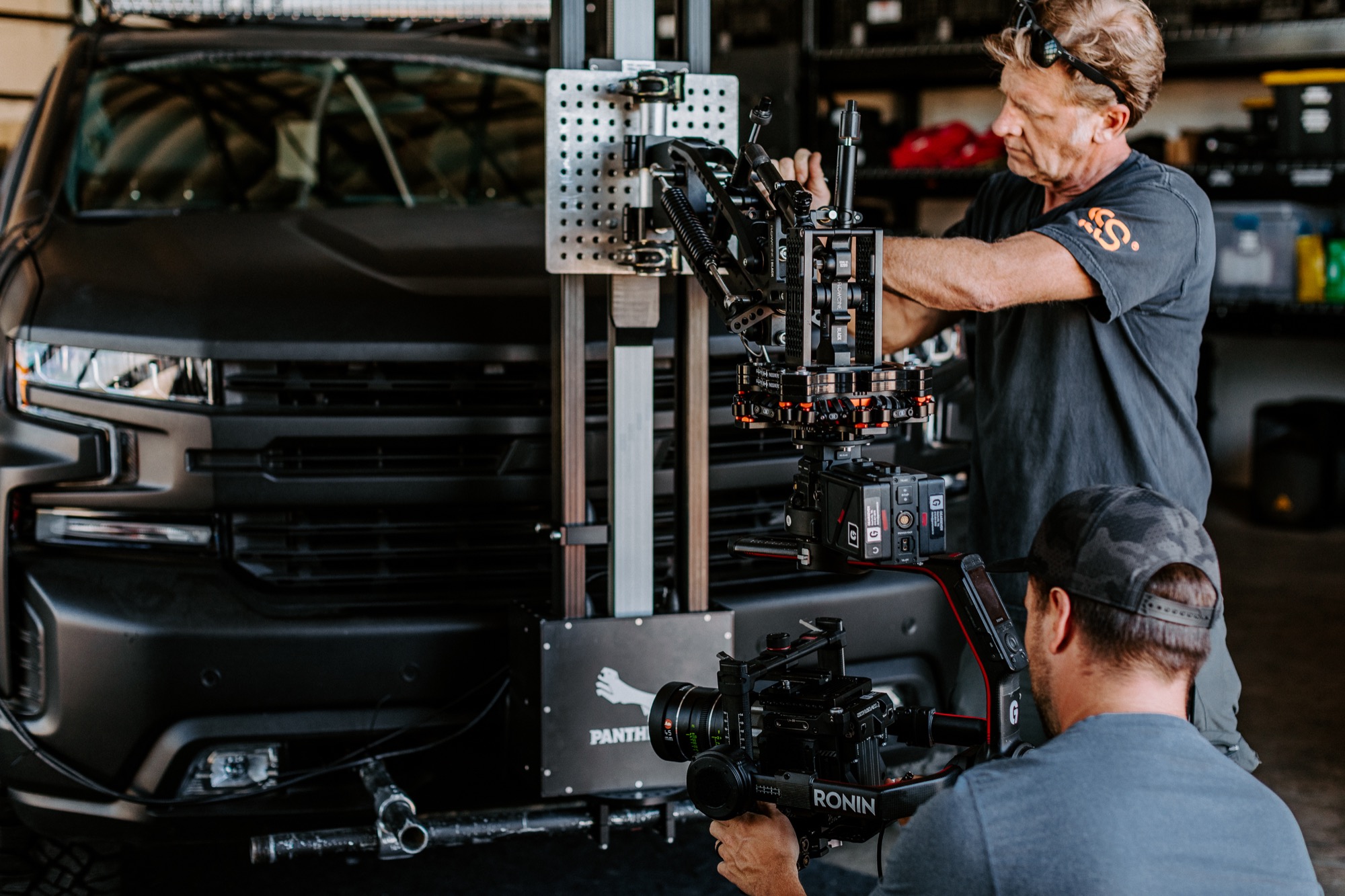 When people come by our facility, one of the most common questions we get is some version of, “How did you build all of this, what’s your story?”

Most are surprised that we’ve been able to build this company in such a relatively short time, and, largely, during a global pandemic.

We’re a group of experienced film industry professionals who’ve been working together for years to deliver unparalleled results via our company Gear Seven.

In 2015, after we realized there was a major gap in the market for premium car-to-car production capabilities in our region, we hatched an idea to do something about it.

We had a sense that Nashville, TN and the surrounding area (and eventually the world) needed better camera car and cinema robotics production capabilities, and thankfully, we were right.

Here’s how it happened.

Let’s start with the basics, a quick overview of who we are.

Headquartered in Nashville, TN, we regularly deploy a fleet of state-of-the-art vehicles, a comprehensive and sophisticated inventory of cinematic video equipment, and teams of highly trained professionals to support productions of all styles, sizes, and budgets worldwide.

In 2015, while still running Gear Seven, Kirk Slawek and Colin Noel slowly began acquiring the type of equipment (Black Arm, Movi, and Ronin, to name a few) that would allow them to launch a new company and begin integrating camera car projects into the Gear Seven portfolio.

These initial acquisitions of gear (and the expertise to operate all of it) were a direct response to that gap in the market they had sensed needed filling. Their vision was not to compete with other production companies, but rather to support them and enhance their projects.

At the same time, they realized a secondary opportunity and began renting this equipment to companies with projects outside of Gear Seven.

Like most startups, things began relatively slowly, but we were confident in our plan, our growing network of contacts, and our ability to deliver on our promises. It wasn’t long before it became apparent they were tapping into a very clear market demand.

Flash forward to 2019 and Ssshift (the original name of Shift Dynamics) was born!

Our first clients began trickling in and they kept us afloat in those first few months. Before we knew it, we’d made it to the end of our first year in business. Things were looking even better than we had hoped, and Shift Dynamics (the new name we adopted in 2021) began picking up momentum.

One of the most surreal moments early on was booking and shooting the “Nascar // Army Car” job for the United States Army.

The original plan for this shoot was to simply film the Nascar Army car on a runway, but while in pre-production on the airbase, we began chatting with one of the pilots there.

After a few mintues he said, "Would you guys want me to fly the Apache helicopter above the cars while you film?"

Our team immediately and emphatically responded with a YES!

The pandemic hit. And, like so many businesses around the world, everything stopped for a time, including the film and video production industry.

After so much progress, we wondered what would become of Ssshift (Shift Dynamics) and how long it would be before we could get back on set.

We’re extremely grateful to be one of the companies to have survived those difficult early months. There was no playbook but we, like so many others, took it day by day and made it through.

Though there were some worrisome moments in there, we never felt that it was completely over. As soon as the industry began opening up, our calendar began to fill again and we were off to the races.

In fact, because of the pandemic, many brands and agencies adjusted their shooting locations to film in areas of the country – like Nashville – that were more flexible with the restrictions that were being put in place.

During this time, we booked a string of major automotive campaigns with Mitsubishi, Audi, and Subaru that gave us an incredible amount of momentum and financial runway. Ford even did a recent write-up about this that featured us.

Ultimately (and ironically), rather than slowing us down, the pandemic actually gave us an opportunity to prove ourselves at a higher level.

We took that opportunity and never looked back.

It wasn't just good luck and the phone ringing though. There were a couple of pivotal moments that allowed us to grow the way we wanted to and be able to say yes to new opportunities.

One was the decision to invest in our Motocrane, the remote arm camera crane that allows for incredibly creative and unique camera car shooting.

This decision was a major risk because we weren’t certain of the demand for the technology, but it eventually opened up an entirely new market of clients and projects to us and significantly impacted the trajectory of our success.

The other (and frankly, more important) resource that fueled our early survival and growth was our investment in people and partnerships from 2017 to 2019:

These two decisions, in particular, became absolute turning points in the history of our company, allowing us to work on some very exclusive projects that we might not have been able to book otherwise.

2019 also marked the official birth of Shift Dynamics, a company completely independent of – though working closely with – Gear Seven, with a mission to partner with other production companies and support their creative video projects.

So that’s the short history of where we’ve been so far, let’s take a look at what’s next.

Where We Are and Where We’re Going

As cool as the last few years have been around here, the momentum just keeps charging forward.

Our client bookings continue to grow.

With that constant incoming work, our team is also growing at a pace we couldn’t have imagined back in 2015.

Our arsenal of really innovative gear is also experiencing rapid growth as we prioritize meeting the creative demands of our clients.

So much so, that in 2021 we made the decision to bring all of our cameras, lenses, and camera support rental packages from Gear Seven under the Shift Dynamics brand.

In such a competitive space, it's also super important for us to stay up-to-date (and sometimes a bit ahead) of the latest trends in cinema technology and hardware.

Additionally, our hometown of Nashville is becoming a much more viable and desirable location for film and video work, which has opened a lot of doors that just weren't even in existence a few years ago.

Our initial vision is now making the rounds of the rest of the industry. Our cinema robotics work is growing, especially in the college and professional sports markets.

Through all of this, we’ve had the incredible opportunity to pack up the trucks and work all over North America, shooting in locations like Seattle, Arizona, Colorado, Atlanta, Virgina, North Carolina, Florida, to name just a few.

We’ve been blessed to be working with a parade of household brands like Chevrolet, Dodge, Subaru, Mitsubishi, Audi, NBC Sports, NFL, Nascar, US Army, Ford, Case IH, Capitol Records, Atlantic Records, Warner Music, and many, many others.

So, what’s next for Shift Dynamics? What are our plans for the future?

Those questions elicit a very simple answer from our team … our plan is to keep growing, both creatively and entrepreneurially in a way that allows us to exceed the expectations of our clients and their audiences.

Our ultimate vision is that Shift Dynamics become one of the top camera movement specialist companies in the world, and an industry leader for custom camera solutions.

We want to be the first call that a top-tier production team makes when they’re looking to support and enhance their film or video project.

We also want our team and gear on a project with Elon Musk at SpaceX or Tesla in the next two years ;-). See ya on Mars!

Call or email us anytime.