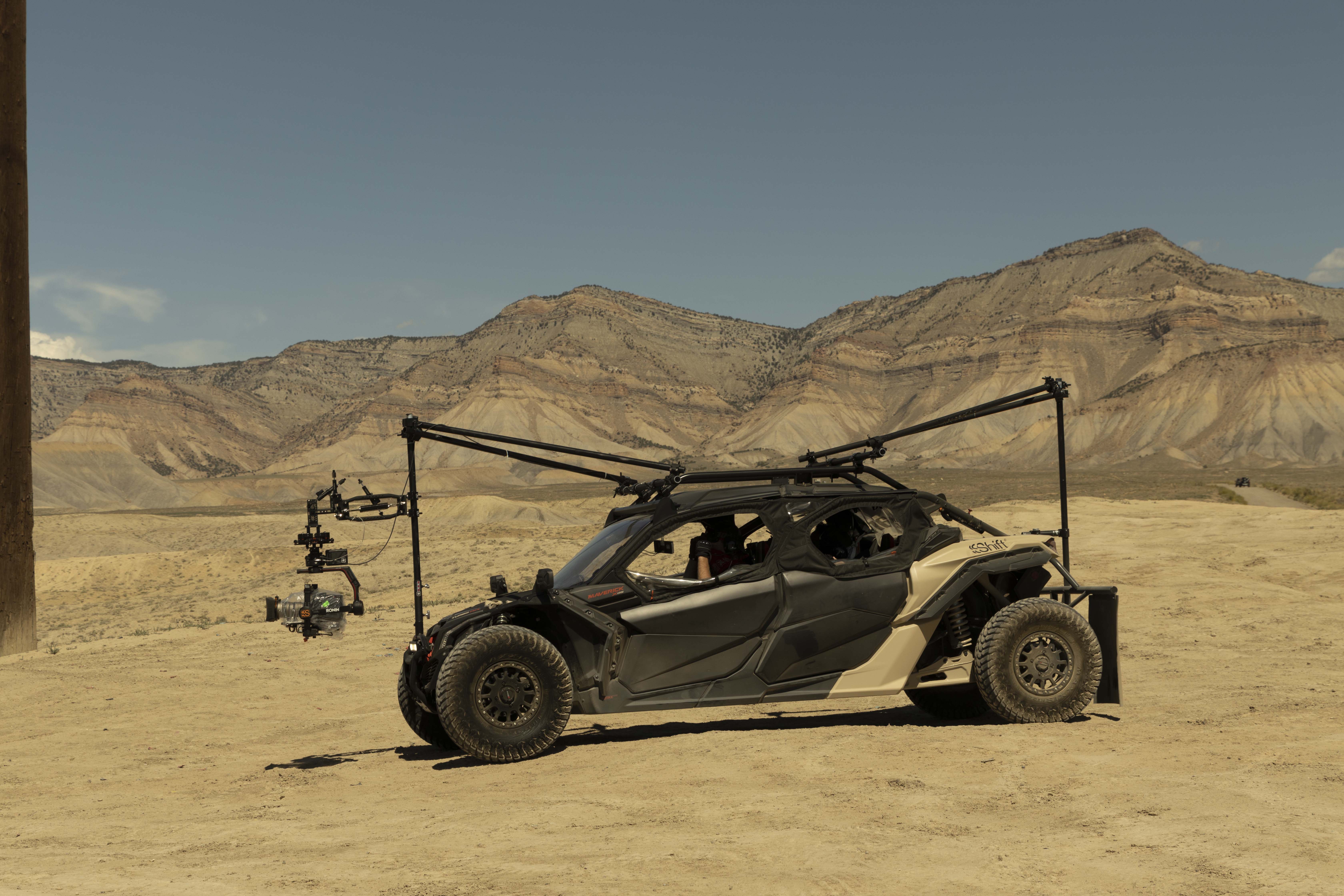 The Shift Dynamics team had the incredible opportunity to utilize the Can-Am Maverick X3 in an exhilarating scene in the heart-wrenching short film, “Rayleigh Scattering”, directed by Connor Carroll. The short film focuses on a final road trip across the country with two friends, attempting to create joyful memories together before they have to tragically say goodbye. Being able to use the Can-Am Maverick X3 in such an intense scene helped further solidify the central theme of the piece. It also allowed for our team to demonstrate the countless capabilities that our pursuit vehicles bring to the table for car-to-car shots.

In regards to the concept, director Connor Carroll explains where the inspiration came from:

“My work explores the grandness of the small gesture. What it means to go that extra mile for someone you care for, whether they are aware of the long walk you took or not. I wanted to tell a simple story of friendship near the end when there’s really no time to wait to say how you feel. It’s part of the human condition I suppose, but after you watch this, call your Mom or something and tell her you love her."⁠

When it came to the cameras that were used, the Ronin 2 gimbal paired with the Flowcine Black Arm, ARRI Alexa Mini and an Angenieux EZ-1 30-90mm.

Connor Carroll explained what it was like to work with the Can-Am pursuit vehicle for the first time:

"It was actually the first time I had ever really gotten to use the Maverick, and it really was perfect for what I was trying to capture. Having it to use with the Side-by-Side was perfect, not only because of the speed it was able to reach, but its flawless ability to maneuver the rough terrain."

When it came to the set up and the process of utilizing the Maverick X3, ensuring that the correct adjustments were made was important in order to guarantee the proper shots were captured. For this shoot, all of the prep and rigging was done back in Nashville before the vehicle even arrived out in Colorado. By anticipating various camera heights, discuss blocking and perfecting camera placement, our team was able to prepare for any needs Diego Cacho (DP) may have during the shoot.

One of the best parts about working with our pursuit vehicles? They can seamlessly be transported anywhere. For this particular shoot, we took the Can-Am all the way to Grand Junction, Colorado by towing it with our Chevy Silverado to shoot in the middle of a desert.

During the shoot, we were able to do heavy off-roading, drift on sand, and maneuver over rough terrain, all while still capturing breathtaking shots by pairing the vehicle with the Flowcine Black Arm.

Precision driver Patrick Wilson explained the process when it came to working with the Maverick X3 and getting the necessary shots:

"Before each shot, we made sure to walk the terrain beforehand in order to gauge where the best place for filming. We then ran the shot a few times to make sure that we were getting the best shots possible. There were a lot of profile-tracking shots done that were able to capture the movement in the frame between the individual and the other car to help with the motion. When there is lots of movement involved, it is essential that adjustments are made and that there is a lot of communication between the crew."

He further explained how helpful it was working together as a team, stating,

"I got to work with a couple of my favorite humans, Connor (Carroll) and Diego (Cacho). I really enjoy working with them, and with a tight-knit group (we were) able to pivot and guarantee (we could) get exactly what they want."

Connor Carroll broke down what it was post-production looked like for the short film:

"The entire edit was finished late last year. At that point, it got to a place where we could say, 'Yes, this makes sense now, and we're happy with it.' The only thing that I didn’t have were the pick-up shots that served as the opening and the closing of the film. I filmed those right before I released it. It was kind of weird though because we finished this thing and didn’t pick it up again for a little bit. After those pick-up shots, we had to do all of the finishing and piece it all together. It was kind of like revisiting an old film of mine."

He explained also how helpful the Shift Dynamics team was when it came to their expertise on set,

"This was just a wide-open free-for-all shoot, and so safety was paramount. Having the Shift Dynamics guys, and Patrick (Wilson) specifically, at the helm of it all was amazing. If you don’t mess around, you will get great stuff. That goes into part two of why working with them is so great. Patrick has always been a resource for me since the first time that I ever did car-to-car. Having people that were able to elevate my ideas on set is always something I crave from my department head, and I always get that from Patrick and the Shift Dynamics team."

Special thanks to Joe Walsh and the Wise family.