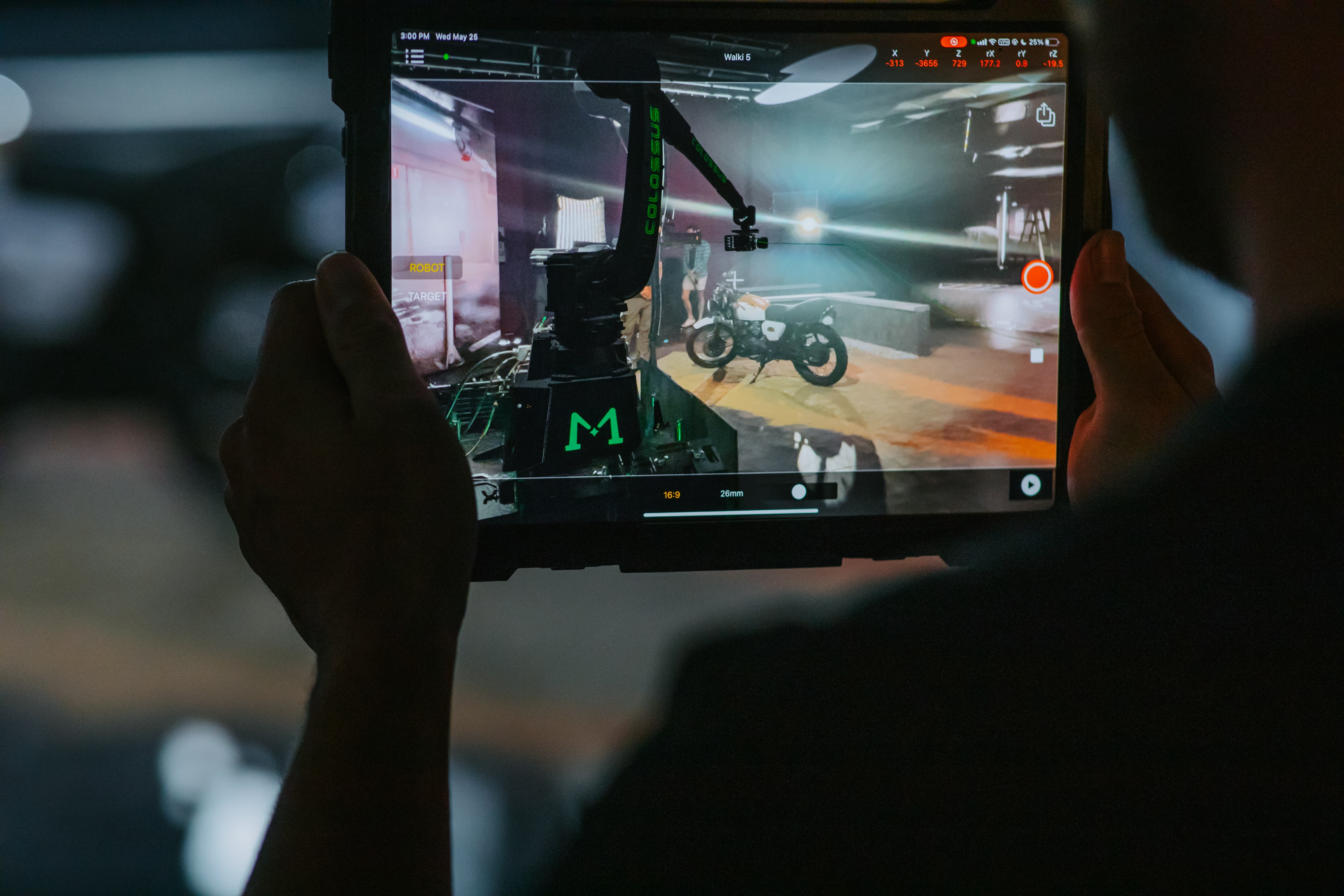 Created in collaboration with Arc Studios and the Nashville Kitchen Studio while in partnership with Motorized Precision, two pieces were shot by Shift Dynamics to help announce the launch of the new app “MP AR”. With the help of augmented reality, the app “places more power into a director’s hands and improves communication with the rest of the crew”. With the ability to see the robot virtually in a space or program a robotic move with the quick sweep of an iPad, the app makes robotics much more accessible for all. Testing the app with our Colossus and MIA robots, the Shift Dynamics team got their hands on the new technology before many in the industry.

As a result of the new app, directors and filmmakers now have more visibility over virtual production elements, including production pre-viz and real time workflow, with an unparalleled level of ease.

Day 1: The creative concept revved up by the team's collaboration, features visually stunning shots of an exhilarating motorcycle scene, captured by Shift dynamics in order to showcase the apps capabilities brought by Motorized Precision. In the behind-the-scenes video produced by Shift Dynamics, they captured in breathtaking shots the way in which the app effortlessly pairs with the Colossus robot in order to achieve new levels of creative expression between directors and their crew.

Day 2: On the second day of shooting, the creative concept that was stirred up in The Nashville Kitchen Studio, features a scene in which a bartender mixes up a cocktail in an array of fast-paced and intoxicating shots. All of this was filmed in order to further showcase the wide range of tools and incredible capabilities the new MP AR app offers professionals in the film-industry.‍

The first scene, involving the motorcycle, was filmed in Arc Studios while the cocktail bar scene was shot at the Nashville Kitchen Studio, both studios powered by Gear Seven. Utilizing both studios allowed for an effortless transition that was able to capture two very different scenes in a short amount of time.

On the first day, the motorcycle scene was shot using the Venice 2 and Leitz Zoom lenses, while the crew also utilized the Colossus robot paired with the new MP AR app technology. A built-in wireless focus called the Heden Ymer-3 was also used as well to integrate the robot for the internal FIZ. On day two, the kitchen scene was shot with the MIA robot in collaboration with the MP AR app. The team also used the Alexa Mini LF and Leitz Thalia lenses to further demonstrate the wide-variety of impressive tools and capabilities of the app.

The edgy parking garage scene in Arc Studios utilized xR technology through disguise that allowed for the motorcycle shots to appear in a real garage setting. It was actually the first time that Shift Dynamics combined the studio’s camera tracking technology with the Colossus robot, pleasantly surprised that the robot’s quick moves were followed well to move the xR scene. Able to maintain focus and the speed, the team was able to deliver shots that immersed the audience even further into the unbelievable world that xR can deliver. By combining the use of robots and camera tracking tools, it was obvious that xR shoots could easily be taken to the next level through the use of both simultaneously.

For the art design, the incredibly talented art director, Elise Lacret, built concrete barriers and pillars in order to capture the industrial feel present throughout the extended reality parking garage scene in Arc Studios. She also added gravel and other textures to the floor in order to further effortlessly blend the xR garage plate with the in-person elements. For the Nashville Kitchen Studio shots, Elise helped design the trendy cocktail bar by blacking out the background. She also brought in a wide-array of different types of bottles and lighting fixtures to create a more moody, classy look. In return, she completely transformed the minimalistic kitchen into a stylish cocktail bar that was perfect for our mixology at Aero Bar to use.

Gear Seven worked in close collaboration with Motorized Precision in order to plan a shoot that would gather ample BTS content for the app launch, while also allowing the production company to demo the technology for their own growth. Director JT McCreery casted the vision for both days of shooting with shots that would capture the essence of the new MP AR app to showcase its ability to bridge any creative gap between the director and crew.

Both Arc Studios and the Nashville Kitchen Studio were utilized in the two days that the commercial was shot. Kirk Slawek, founder of Shift Dynamics explained what production was like working with the new technology:

“The battle we’ve always been in (is taking) a few hours to get everyone up to speed to sync the robot technician’s understanding of the moves and the pacing. Now when you can just give it to the DP and they swing their move, and it may not be perfect, we can tweak that stuff and it allows us to shoot a lot more stuff a lot quicker. With the target modes, we saw some benefits with mapping out objects in the space so you have collision references and can do more dynamic moves that follow the target through space and would otherwise almost be impossible to do that quick previously. (In the shoot), we kept going back to our roots of how we knew how to program things and (once we stepped) back to realize the simplicity of the app and (utilized) it, everything (got) back on track”.

The DP and technical director at Shift Dynamics, Justin Wylie, explained his thoughts on the new technology:

"As a DP and a robot op, it was so easy for me to just be in my DP element. I could just say, ‘Here’s the move I want and here’s what’s in my head.’ (I was able to) get it out through the app, hand it off to another robot op, and there it was. It was so easy to just frame it up the way I’d frame up a normal move. To even get a shot that looks convincingly handheld out of a robot, my jaw was on the floor. It was crazy. Being able to do that without hours of programming keyframes and trying to make it look natural, it was just there."

In post-production, the demo pieces were edited by director JT McCreery, colored by the skillful Brett Price, and the sound design was done by the masterful Ryan Pribyl. Motorized Precision also utilized the BTS footage captured by Ryan Camp to further market their new app within the App Store and on social media.

The team at Motorized Precision was extremely pleased with the results of the BTS content captured, while Shift Dynamics was able to learn and test out the new technology through the course of the shoot. The stunning visuals that were captured of the robots collaborating with their new technology further helped create content for the launch of Motorized Precision’s app, while also showcasing all of the extraordinary capabilities the app offers. In regards to the final pieces cut by our team, this opportunity allowed for the creation of a few mini Gear Seven demos and the ability to become early experts in the new app. The final shots will also be uploaded to FilmSupply for licensing use for those in the industry.